From August 27-October 8, 2006, Naomi Miller blogged about her art project "The Iron Maiden Tour & Residency '06," described as such:

This project places Naomi Miller within the homes of her friends for a series of short-term residencies. Acting as both a house guest and a working artist, Naomi photographs her friends' activities. Her friends ask for a work exchange in compensation for room and board. The services range from errands to meal preparation to tutorials.

Naomi seeks to spend time with her friends and briefly integrate herself into their individual lives. While this method is central to maintaining her friendships, it also sets up the elements necessary for her art practice. Her relationships provide the impetus for her photographs.

Naomi will show images in the host's home from the previous residency on her final day. This challenges Naomi to produce show-able work on an immediate and regular basis. Work shown will be a mix of photographs, documentation of the work exchange, and other material relevant to the individual residency.

This residency is available to both recent and older friends of Naomi living in North America. The Iron Maiden is the '78 Volvo she drives from one residency to another.

We sleep late. Jed and Andrea leave to visit Jed's mom in Westchester County and do their laundry. I begin to see a pattern in the apartment listings on craigslist and realize I've set up arbitrary rules to navigate the cryptic postings. I don't pursue less than a 25 word description or the use of UPPER CASE. Regardless, I see two apartments. One is an enormous, huge, and fabulously large room in a Bed-Stuy brownstone whose residents are going for an anarchist-collective type thing, if that's even possible. It's expensive, though. The other apartment is easily overshadowed by two pairs of earrings I buy before I see it.

Ann, who lives in San Raphel, CA is visitng NY, and I meet her, her charming baby Luke Emmet, and her friend Pamela in the Lower East Side. Luke is sleeping, strapped onto Ann's back. Ann and Pamela give me advice about apartment-hunting, like check the water pressure and ask how often my car will be broken into. Luke wakes and cooing overtakes the conversation. Ann buys us Australian homemade ice cream (?) and I walk to the subway. I wonder about my own experience with the city, how heretofore it has been dictated by friends' locations and agends. 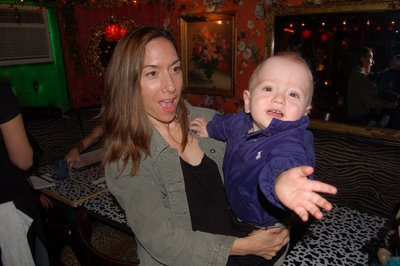 I decide that this is going to be the last day of the Iron Maiden Tour & Residency. I'm leaving Jed & Andrea's apartment tomorrow and they are the last official stop. I find myself anxious to create a life for myself here, which is a distraction from visiting and watching my friends engage in their lives. I want to jump in and bask. (I also find I'm incedibly spent. The next day I'm grouchy and the next day I sleep a lot and wake with a swollen throat.)

Before meeting Eirik and Heidi for lunch, I walk to an apartment on the edge of East Williamsburg, Bushwick, and Bed-Stuy. I'm skeptical and note the house number spray-painted on the two floor building. My future roommate greets me at the door with his three year old affixed to his chest. I relax enough to sit down and talk about art in the city for a half-hour. It takes me four days to give into to the warm feeling the rough apartment gives me. 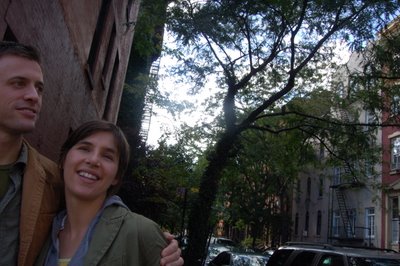 I meet Eirik and Heidi at a French cafe on Bleeker Street in the West Village. Eirik went to grad school with me. They have just moved to Boston where Eirik is a tenure-track photography professor at MassArt. The meal is quite enjoyable and we plan on meeting in New Haven sometime this fall for a critique with various transplants from grad school.

Andrea makes vegetarian shepard's pie for dinner which is tastier than you meat-eaters might think. Their friend Andy comes over and we go to Williamsburg to see Jed's coworker's band. They've just been signed to Sub Pop Records and perform in a wharehouse-like space, raw and youthful. We stand at the back of the room, looking in on a passed era of our lives. The band is dedicated, loud, and buoyant while the crowd surges forward and flails. The hack bar makes brisk sales of Pabst and Bud, I see a guy I worked with this summer, and we leave when we guess they're about finished. 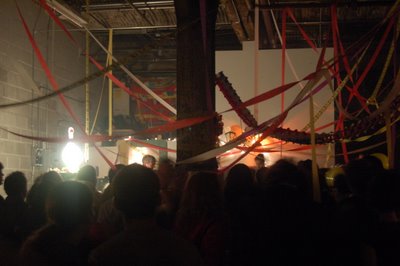 I feel super tired, but we get a drink at Spike Hill and Jed and I discuss the conspiracy possibilities of Janet Jackson & Justin Timberlake's Superbowl stunt. Back at the apartment, Jed and Andrea talk about the artlessness of recent horror films. This might or might not have made Andy uncomfortable and he leaves. It's 3 am. 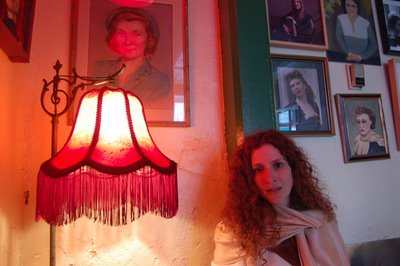 Days have turned basic and focussed. Between periods plugged into the computer, I have lunch with Jess at Mama's in the Lower East Side. We talk about what we are willing to do for art and how long that can be sustained and how much choice there is in the matter. That and whether generalizations can be made about our five friends from high school who are all so different. None of us are married nor have children, and we don't even know if that's what we want. How does such a phenomenon happen? Is it pure coincidence?

Later, I see three apartments, two of which I consider seriously. I feel like I don't know what I want and I have to see as much as possible to have any idea. It's like I'm lost, but without the pure anguish. 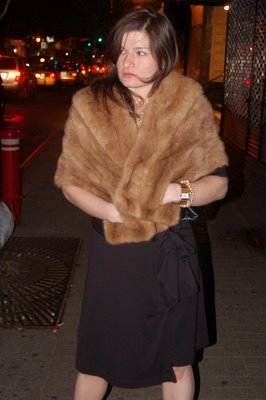 Jed and Andrea go food shopping. I go back into the city and have a late dinner with Cameron and a group of people he's with. Then I meet Collyn in the Lower East Side where the bars have turned clubby and frat-ish. It's her 24th birthday and she's resplendent. We worked in Maine last summer together. She gets saucy enough ask direct questions, but is still sensitive to be affected by mine. Whatever, she's brilliant and tortured.

Jed and Andrea are gone by the time I wake up. The big theme of the first half of the day is: do I say yes about that apartment? Theresa needs an answer by 2pm and the pressure overpowers everything else, like practical thoughts. Fortuneately, Theresa and Liam decide against it at the last minute, so I dodge that bullet.

I left my digital card at home, so there aren't any digital pictures of today.

I meet Andrea at the Natural History Museum. She takes me to the off-limits floors where bugs the size of my hand are kept in casual and flimsy-looking vitrines in the hallway. I sort of yelp my way to Andrea's office. We go to the roof and find wierd experiment-like Ziplocs with solar-powered cells attached and scattered around. I get locked in a stall in the women's bathroom. Andrea says it's never a dull moment with me.

We go to the Painting Center in SoHo for a New York minute, though it's lovely to see old painter-types. Then we go to a party put on by Sandbox, a photo studio I worked for in San Francisco that is opening a New York studio. It's schmancy and cool, full of flitters and gabbers. I try to flag down the hors d'oeuvres and run into a number of people I forget I knew. Or, it's more like finding myself in New York and there are all these other people, and I happen to know some of them for one reason or another.

We go to Joe's Pizza on West 4th, my super absolute favorite, then go home and talk until Jed gets back from the recording studio. I get back on craigslist for a good obssesive amount of time. 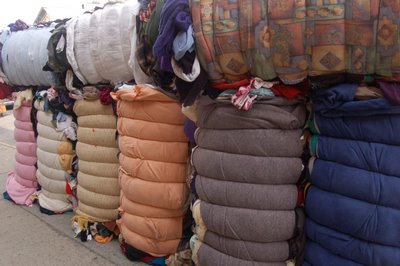 Five apartments seen in one day! Ranging from depressing to maybe-I-should-take-this, from a nuts-o Puerto Rican woman to sweet-as-pie German brothers. I walk a lot and meet several neighborhoods in Queens & Brooklyn. Everything seems possible and impossible. I think of the "Kim Possible" cartoon my nephews watch, and the play on words seems appropriate. That and her pet naked mole rat, Rufus. 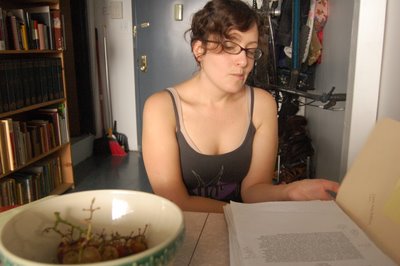 Andrea paints, preparing for a November show in Kentucky, then leaves to teach. We have dinner at home with beer and creative things from the fridge. After seeing the 5th apartment, Andrea and I get Carvel ice cream and its sweetness is almost too much to bear. My fellow SF transplants, Theresa and Liam, want us to jump on a slightly-too-expensive apartment in Bed-Stuy and I just don't know.

These days in New York... They are slated as Exclusive Extended Tour Dates for the Iron Maiden Tour & Residency. This is a thinly veiled ruse (and no one is fooled) to have places to stay as I set up a life here. So I don't know if I should be continuing this blog to perpetuate the construct of the project, or if I should throw in the towel and give it a break. 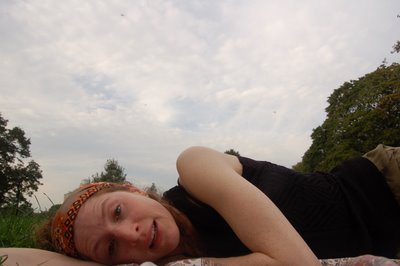 I spend some time with my friend Jess, whom I've know since I was 15, and is an actress. I drive to her apartment in Prospect Heights, and she's prepared smoothies and a creative pasta salad picnic. She gives me Tylenol to help dissipate the headache I've had since entering the city. Under a tree in Prospect Park, we eat and talk about serious life matters, which is what one does with Jess. We find we have front row seats for a cross country meet as 60 high school boys huff by at various speeds, school colors emblazoned on their young chests. Back at her apartment, she shows me a recent audition tape she's created and we debate its intended audience.

Andrea and Jed and I get take-out and watch the film noir "Out of the Past" with Robert Mitchum and Kirk Douglas (so young!). I know these two from Providence where we all worked at a cafe & cinema, i.e. The Best Worst Job We Ever Had. They married two years ago and moved here about 6 months ago. Andrea is an artist and teaches at Pratt and works at the Natural History Museum, pinning bugs. Jed is an artist and musician and is learning to be a sound engineer. Their banter is infectious.

Later, I get a drink with Cameron, whom I know from my summer work in Maine. He lights a fire under my ass and the city is open.

Naomi Miller is an artist in New York City. These blogs follow her art projects that involve her 1978 Volvo station wagon. Recently, she has been collaborating with Katarina Jerinic on the project "The Work Office (TWO): www.theworkoffice.com